Take a short boat trip and see the history of Tenby’s rescue boat slipways and stations throughout time whilst taking in the beautiful views of  Tenby’s walled town from the sea, its harbour and north beach. Gentle and fun trip for all ages.

Mary Gabriel will take you on an approx 1/2 hour trip around Tenby’s North Bay and Castle Hill. With a commentary that tells a fascinating history of Tenby’s 5 rescue boat stations—culminating with an insight into today’s hi-tech station which houses one of the world’s most advanced boats.

The Trip is approx half an hour, running from 9.45 am. Tours leave every half hour, so time at sea is a little shorter than 30 minutes to allow embarkation time.

Call at our booking kiosk in Castle Square, just above Tenby Harbour or telephone 07415 493109

Trips run daily from 9.45am, April to September.

For your safety, all trips run in suitable weather conditions and the skipper’s decision whether to sail or return early is final.

Brief Crew and Lifeboat History of the Mary Gabriel when she was stationed at Hoylake:

In 1974, Helmsman Don Archer-Jones received thanks of the Institution on vellum, together with Jimmy Quinn and Richard Perrin, for the courage and determination displayed when the ILB rescued a climber on the Little Orme Llandudno, the Llandudno ILB being damaged while attempting to rescue the climber.

In 1990, the station was awarded a special framed certificate of thanks for the services carried out by the crews between 26th February and 2nd March, when the towns of Towyn and Kinmel Bay suffered severe flooding of up to 2 metres. Crews were utilised for up to 19 hours each day, a total of 71 hours were spent in the area, eventually taking over 200 people to safety. In all, crews from Rhyl, Llandudno and Flint, rescued over 600 persons (and a few birds/dogs/cats, etc.!)

In 1992 The station boat “Mary Gabriel”, previously station boat at Hoylake, was badly damaged on service to the beam trawler “Columbus”. The boat was taken by road to Poole but has since been rebuilt. The Mary Gabrielle is now being used as a pleasure boat, taking trippers around the bay in Tenby, West Wales from Tenby North Beach

Take A Trip On A Lifeboat - Around Tenby In Mary Gabriel 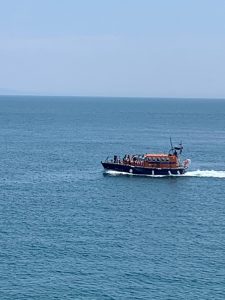 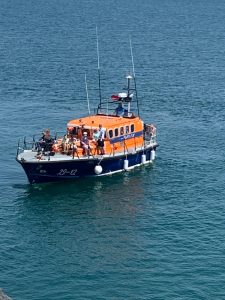 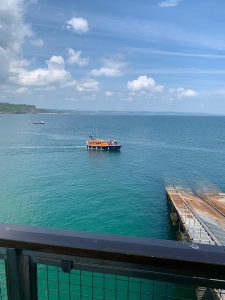 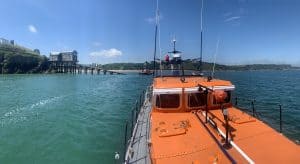 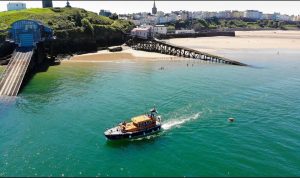 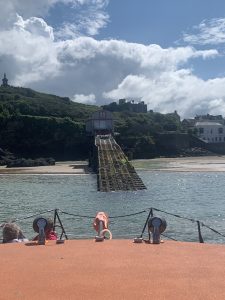 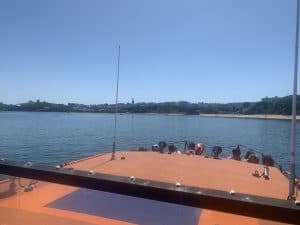