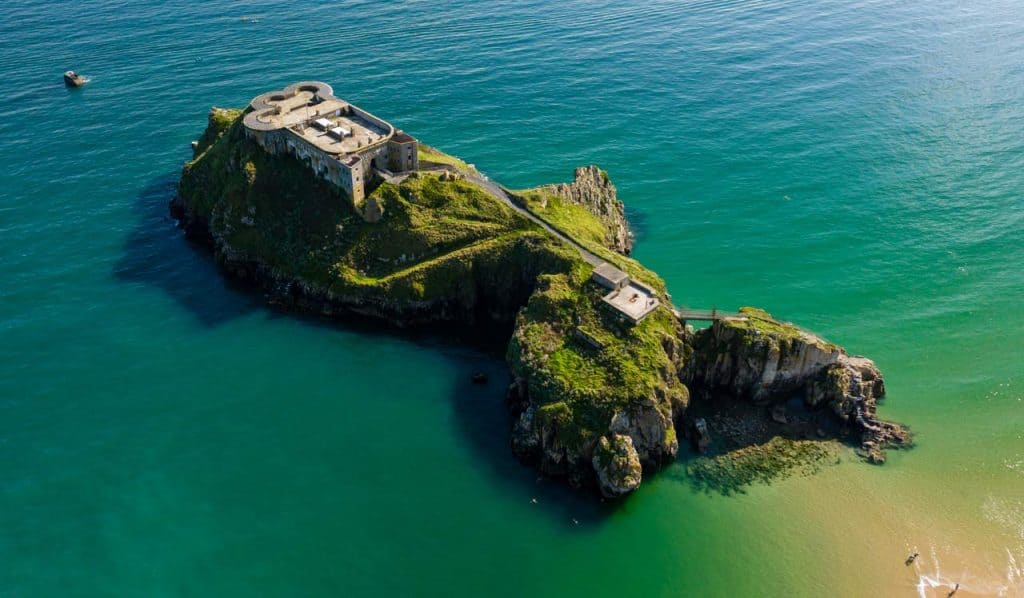 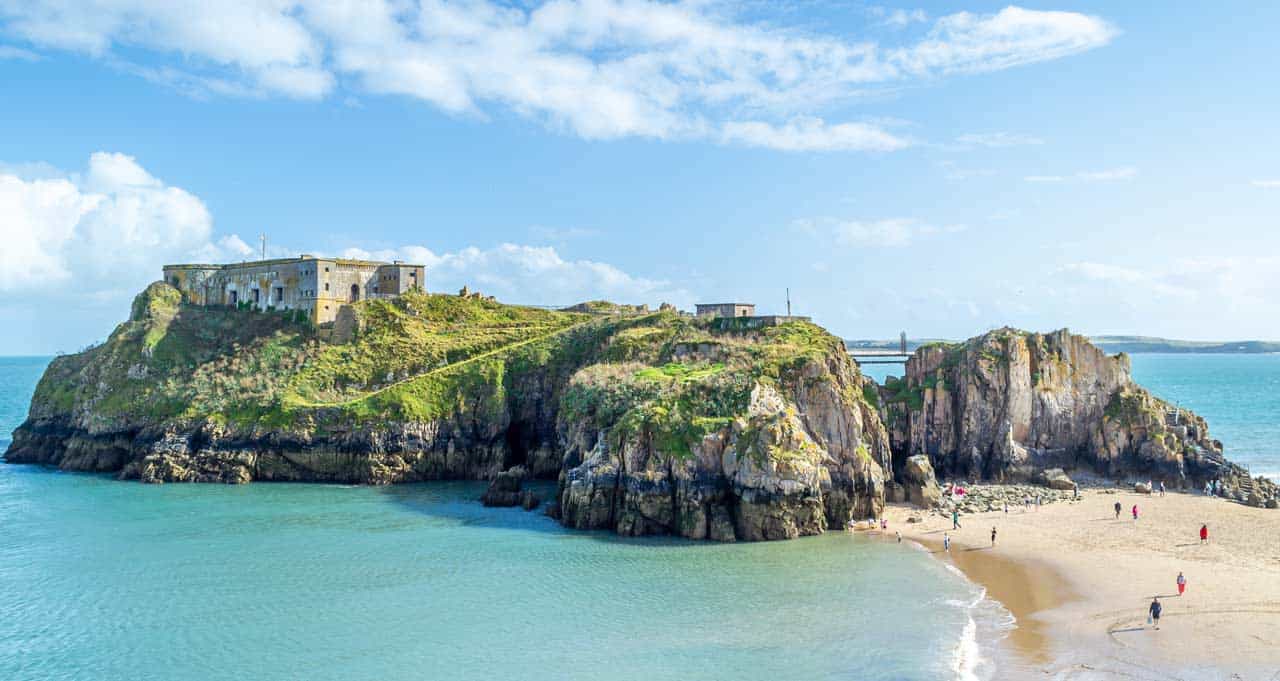 Assuming we are open, and that the tide is out!…

…getting on to St Catherines island is an adventure in itself, lots of steps, a bridge and a few more steps before you get to our “we-are-open” Welsh flag on the Second World War gun emplacement. You can check tide times HERE. Wear sensible shoes for the uneven steps, take your time and be prepared to carry your dog over the open bridge. 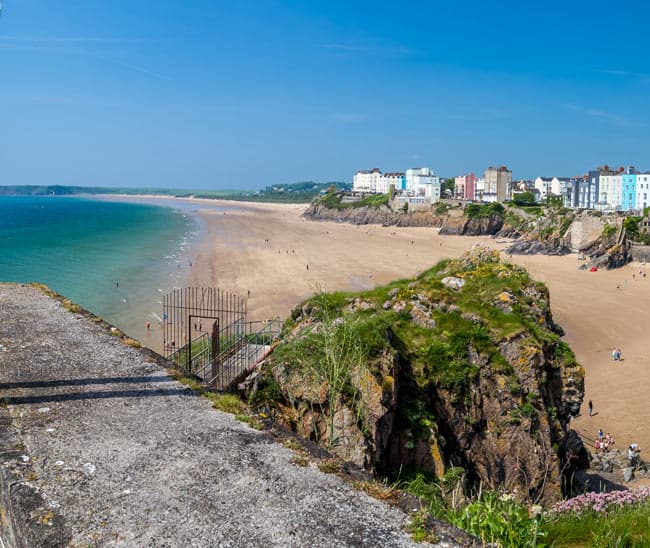 What you can see when you get to the top (and a chance to get your breath back) are the views – 360-degree views around Carmarthen Bay and the best view of Tenby. Then it’s just an easy walk to the fort itself. Inside, at the moment, we have open the main gun deck of the mid/late nineteenth century Palmerston military fort. There we show our films and give regular half-hour illustrated talks on the history of the island and fort. This is originally where six of the huge guns were sited in casemates facing east and west to protect the anchorages against enemy ships. Three more guns, even bigger, were sited on the roof facing out to sea. 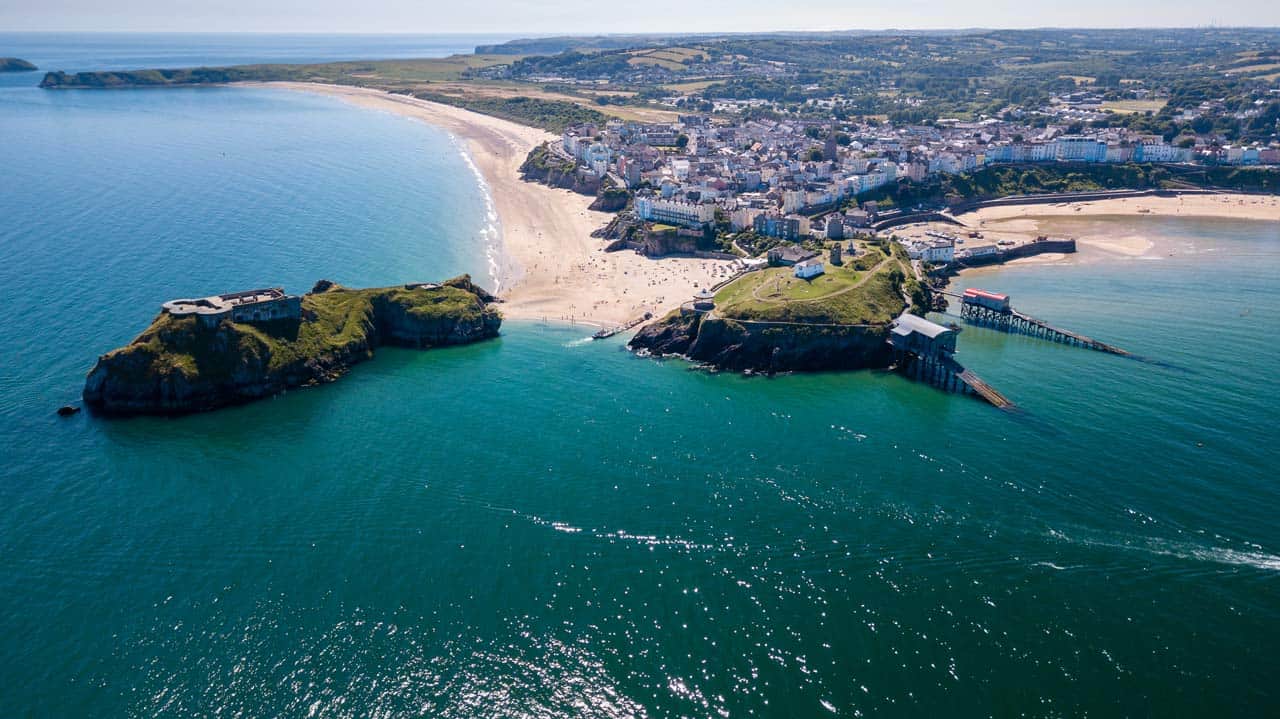 The latest in our regular film shows was just pre-Christmas, six showings of the “Polar Express”, the Tom Hanks animated film. We originally planned one evening show but had 240,000 hits on our Facebook page and it turned into a major five-night event with about 500 visitors, staff in costume, refreshments, Father Christmas in his grotto and presents for the children. Our preparations were inevitably interrupted with a fire inspection but fortunately, we passed. Fortunately, also, everyone who came seemed happy and we were only forced to postpone one day because of the weather. Our next major planned event will be in April with our Titanic evenings, ballroom dancing on our “promenade deck”, refreshments and a scramble for the lifeboats at the end of the evening to get off the island (Ship) before the tide comes in. (Only a limited number of lifeboats I’m afraid). We say planned event but at the moment we are floating ideas for an event for before Easter. Watch our Facebook page and in the meantime get your tailcoats and long dresses out of mothballs and pressed.

When we get the necessary permissions and finance in place we will be able to show you the rest of the fort – plans are prepared to show visitors three more areas: the gunpowder magazines set into the rock at the back of the fort (Re-flooring and lighting planned to start soon), the living accommodation for the 100 soldiers and officers of the Victorian garrison in the basement, and the roof with even better views. To open these two last areas we will need to install lighting, fire doors and a new staircase and safety features to the roof. Then, at parents’ request, we can lock the children in the old prison in the basement. Sorry, that should read: “show pirate films for the children in the old prison to keep them entertained and happy.”